Ana Chan ’18 spoke with Stephens College about how a Stephens-led networking trip to New York launched her career in audiobooks production. 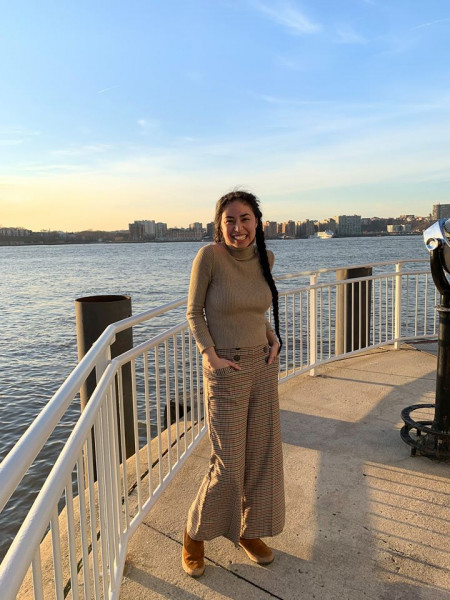 What do you enjoy about your position at Simon & Schuster?

I enjoy so much about this position. I am in daily professional communication with celebrity representatives, from literary and television circles, and I work with the actors we hire to narrate our books; I am reading constantly, and am often given creative license with decisions involved in producing the audio; and lastly, I am on a team of professionals whose work ethic and career goals inspire my own. My colleagues and associates have taught me to think quickly, communicate aptly, and cooperate creatively. It’s an incredible privilege to work where I do — both professionally and physically. As our office resides in Rockefeller Center, where NBC studios, Radio City Music Hall, and Christie’s Art Museum also operate, there is assuredly never a dull moment.

What's been your favorite project so far?

So far, the greatest and most challenging project I was part of is one that called for a joint-effort from the whole department: recording an oral history of 9-11 entitled "The Only Plane in the Sky." It was an enterprise, since we were tasked to work with a 45-person cast — a number that exceeds some of the largest theatrical ensembles. (A few of S&S employees were even called to record some lines, myself included!) But the effort was worth it: the audio won Audible’s Favorite Listener Award, also snagging the Audies’ “Audiobook of the Year” and “Multi-Voiced Performance” Awards for 2020, and it was reviewed in the New York Times November issue.

What did you do on your networking trip to New York? Who did you meet and how did you pivot that experience into a job offer?

The networking trip Stephens offered was an indelible ingredient to planting the seeds of my ambition in publishing. Before going, I had no idea what it was I wanted to do with an English degree — after the trip, I had my heart set on audiobooks. We had visited multiple contacts in the literary and arts arena, from an audiobook producer in HarperCollins, to a senior manager at a theatre agency. I spoke about this experience in my application to Simon & Schuster, particularly about the trip to HarperAudio, as it was this conversation that gave me a new excitement for audio publishing. I think I made a successful impression on my team at S&S.

How did your education and experiences at Stephens prepare you for your work and life in NYC?

My education at Stephens was a remarkable foundation for me to start my work life. I learned how to manage multiple assignments at once — an invaluable skill to have in a place like New York. Every day, I was forced to express meaning through writing and speech, and challenge my comprehension skills by reading an average of a book a week (something I’m now doing on the daily at work!). I became increasingly confident in my ability to articulate an idea, and to trust in my own analysis — not only of books, but of social and professional situations as well. Foremost, studying at an all-women’s institution gave me something I will take with me for the rest of my life: empowerment. And, since publishing is a female-dominated field, the transition was seamless.

What was it like to move to New York? How are you adjusting to the city?

Ever since I was a little girl, it has been my dream to live in New York City; so, goes without saying: I felt no adjustment at all! I was a fish thrown in the sea, ready to swim. The public transportation, even, felt comfortable for me, as I’ve never driven in my life, and was hoping I could avoid that by living somewhere like New York. And here we are! I immediately fell in love with a culture that I felt I was made for since birth: diversity, vibrancy and eccentricity.

Do you have any advice for current students as they look towards graduation and starting careers?

My advice to current students is the same advice my father gave me when I was an undergrad: remember what you love, and why you love it. Continue to love those things in life, remind yourself about those passions, and pursue them with your whole being. If you feel like you haven’t found that love yet — don’t worry: you will! You already have love in your life; living is just a matter of identifying it.