Fashion students listened to his presentation in which he discussed his inspirations to create everything from custom-painted shoes to expansive murals.

“Everything is a canvas,” Seals explained. “I go by intuition. If I feel it in my soul to do it – I do it.”

His one-of-a-kind shoes and apparel have been sported by professional athletes and celebrities, including St. Louis Cardinals player Harrison Bader and performers Chance the Rapper, Big Boi, Erykah Badu and Nipsey Hussle.

For the past two years, he has designed the hat for the St. Louis Cardinals African American Heritage Day. He also hosted the first art show ever held at Busch Stadium and threw out the first pitch.

Seals imparted several pieces of advice to the fashion designer hopefuls, with a focus on hard work and relying on intuition.

“Always better yourself and put in the work,” he said. “I paint my way through it, even if I don’t feel it.”

When asked about his creative process, Seals said he prefers to not think about it too much. 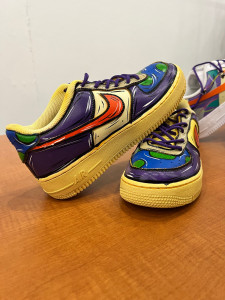 “If I’m doing a piece and I hate it, I keep going because rightness is on the other side,” he said.

First-year Fashion student Dymin Hickman said her eyes were open to what is possible in art and in fashion.

“What may be trashy now could be high fashion 15 years later,” she said.

Dr. Monica McMurry, Fashion professor, said the concept behind “Be Curious” is to think outside the box.

Fashion students Hannah Kleman and Katie Ciolino have taken that to heart and created a fashion line, Reduce Fashion, that will be featured at this year’s Kansas City Fashion Week.

The pair designed several pieces using materials they found thrifting, including a quilt and placemats. The result is an homage to the 1970s and 1990s, with a patchwork jacket, wide-legged jeans and a bucket hat.

Both said they were inspired by Seals’ presentation.

“I love his emphasis on betting on yourself,” Kleman said. “Fashion is very competitive and if you don’t have self-confidence, you don’t have anything.”