MFA in Television and Screenwriting

For official curriculum requirements, see the Graduate Curriculum Catalog for the year you entered Stephens. 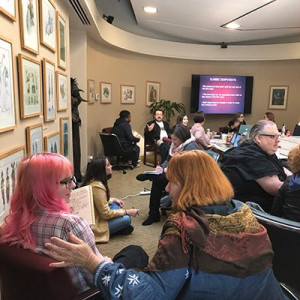 This intensive 10-day workshop emphasizes story structure and character. At the core of the workshop is a foundational class on Screenplay Structure. It presents the basic elements of the three-act structure, which underlies all of film and television writing. Hand in hand with structure comes an examination of how to write rounded and riveting characters; the two are inseparable. During this workshop, the issues of structure and character are reinforced through guest lectures on the structure of one-hour television drama, as well as half-hour comedy and web series. Guest speakers who have created indelible characters share their process, and there are field trips to working writers rooms in studios.

Over the course of a year, the student will develop and write a full-length screenplay, working one-on-one with a professor/mentor. This class is devoted to the development of an outline for the screenplay and beginning the script. Emphasis is placed on structuring the story, gaining a deep knowledge of the genre of the piece and its antecedents, and creating multi-dimensional characters and the world they inhabit.

This course explores the earliest years of screenwriting from the birth of film through the flowering of the silent era. A particular emphasis is placed on the predominant female screenwriters of the era, with close investigation of the careers of screenwriters such as Frances Marion. The overview ends with the birth of sound at the end of the 1920’s.

This intensive 10-day workshop focuses on the challenge of crafting an original one-hour pilot, and finding authenticity in one’s script. In addition, students will focus on rewriting and revision. The workshop will also examine how scripts achieve authenticity — how a script rings true, no matter what the genre it is written in. Guest speakers will help prepare students for writing their one-hour pilot by discussing pilots they have written and examining successful television dramas. Notes will be given on the screenplays in development, and actors will read scenes from the spec hour-long television scripts that were completed in the fall, giving a different perspective on what kind of revisions are needed as actors engage with a script.

In this course students write a first draft of a screenplay, working from the outline completed in semester one. You will revise the script based on notes and suggestions from your mentor/professor, and at the end of the semester the script should be professionally crafted and ready for the market.

During this course the student learns to develop and write a one-hour television pilot script while working one-on-one with her professor/mentor. The student identifies an idea rich enough to support a series; create compelling characters and a show “bible,” outline a pilot story, and complete a one-hour pilot script.

This class covers screenwriting as it changed radically with the birth of sound, and then developed during the Depression era into the studio system, which peaked just before and during World War II. The studios produced masterpieces of construction, even as writers complained bitterly about their work being treated as interchangeable moving parts in a system controlled by the studios. The course ends with an examination of The Best Years of Their Lives, which marked the beginning of the post-World War II era.

This intensive 10-day workshop focuses on the arc of stories in an original series, and how writers work together to create story arcs over an entire season of a television show or web series. Students will pitch ideas for an original series, which may be hour-long, half-hour, web series, or close-ended cable series. With feedback from mentors, they will begin creating their own original series, which will become their thesis project. In addition, guest speakers will focus on the story arc of characters over time, and how to achieve a productive writing room.

Working one-on-one with a new mentor in year two, the student will develop and write a full-length screenplay. This class is devoted to the development of an outline for the screenplay and beginning the script. Emphasis is placed on structuring the story, gaining a deep knowledge of the genre of the piece and its antecedents, and creating multidimensional characters and the world they inhabit. If students wish, they may work on an original web series instead of a traditional screenplay in this class.

Each student will begin the work of conceiving, outlining, and beginning to write an original series, which may be either a one-hour drama, half-hour comedy, web series, or close-ended cable series. By semester’s end, each student will have at minimum the pilot episode and the beginning of the show bible completed.

This course examines the history of screenwriting from the end of World War II, through the break-up of the studio system, and into the revolutionary 1960’s. This course will explore the impact of the 1950’s and the tension between the gritty realism inspired by the Actor’s Studio and the crushing blacklisting of suspected Communists in Hollywood. We will also examine the impact of Italian neo-realism and French New Wave cinema upon screenwriting. The semester ends with a study of how the counterculture movement of the 1960s and the collapse of the studio system affected the film industry.

The final intensive workshop of the program focuses on the business of a writing career. A variety of speakers will outline the avenues open to writers as they launch into the business. Agents, managers, development executives, television writers, screenwriters, web series writers, and producers will share insights about new opportunities offered writers in the age of digital film and the internet, as well as more traditional approaches. Students will also continue work on the original hour-long television series, taking notes on the outlines of scripts for episodes, and weaving together changes within stories as they ripple through the entire series.

Students will revise and complete the screenplay they started in SWR 605, emphasizing story structure elements such as a gripping opening, a strong midpoint, and an emotionally fulfilling climax. Implementing notes and the mentor’s feedback will be important milestones, acting as practice in taking notes by studio development executives. By the end of the semester, the screenplay will be finished and ready for the market.

Students continue writing additional episodes of their original series, which is their thesis project, as well as mapping out future episodes. At semester’s end, they will pitch their show to a panel of three industry experts (via Skype).

This course traces the history of screenwriting from the start of the 1970s, an era of great experimentation within the studio and independent cinema, producing eccentric and groundbreaking films such as Nashville, Five Easy Pieces, and the masterful Chinatown. We will examine the transition from personal filmmaking of the 70s to the commercial success of Star Wars in the 1980s, resulting in a stultifying commercialism within the studios, which continues through the present day. We will learn how this created opportunities for a vibrant independent film scene, examining writers such as Nora Ephron, John Sayles, and Miranda July. The course takes us into the 21st century when television drama moved into prominence as the home of deep and interesting storytelling. We will study contemporary television programs such as The Wire, The Sopranos, Transparent, and Mad Men, which have ushered in a new golden age of television writing.

The internship in TV & Screenwriting is designed to provide students with advanced instruction and professional experience deepening their understanding and knowledge of the television and film industry and/or the world of academia. Students may work with their adviser to seek out internship experiences that strengthen their professional writing skills and expose them to career opportunities within the industry.