The series is supported by a $1 million endowment by 1956 fashion alumna Jeannene Booher, who established the lecture series to ensure Stephens students have contacts in the fashion industry. Each guest gives a public lecture and has focused interactions, such as workshops or critiques, with fashion students. 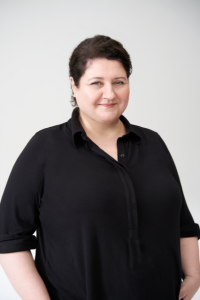 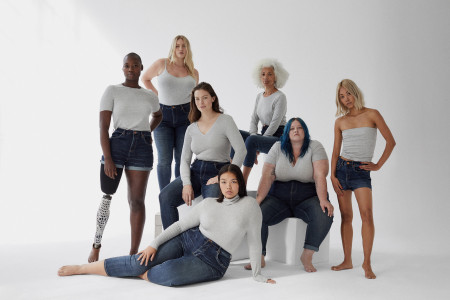 Alexandra Waldman is the cofounder and creative director of Universal Standard, a company she started with her business partner and friend Polina Veksler. They set out to close the infamous size gap in the fashion industry by creating a brand of uniquely modern essentials for women of all sizes.

At Universal Standard, Alexandra develops the creative vision for the brand and oversees both the design of all collections, and the overall visual direction of the brand. The goal for the brand remains to change the way fashion looks at women and the way women look at fashion.

Before starting Universal Standard, Alexandra lived and worked abroad as a journalist and marketing professional. Her editorial and journalism work included writing for publications such as VICE, WWD, International Beauty Report and the Japan Times, among many others. She spent 16 years abroad, in Tokyo as a Fashion, Arts & Entertainment newspaper editor, in Paris as a writer, and most recently in Moscow as the Global Head of Marketing for a large international financial firm.

Alexandra received her Bachelor of Arts in English Literature and Comparative Linguistics from Carleton University in Ottawa, Canada, and speaks several languages, including English, Russian, French and Japanese.

That’s why Booher, a 1956 graduate of Stephens College who has worked with some of the best designers in the country, has donated $1 million to establish The Jeannene Booher Fashion Lecture Series to benefit the School of Design.

“I had a wonderful experience at Stephens,” said Booher, who has served in the past as a Stephens College Trustee and member of the Executive Committee. “I am very happy to be able to do this.”

After graduating from Stephens, Booher went on to study at the Parsons School of Design in New York City and worked with a number of design greats, including Pauline Trigère, Adele Simpson and Arnold Scaasi.

She said she completed Parsons School of Design in one year.

“I had so much work at Stephens, Parsons was quite simple after that,” she said.

Booher was a partner and designer for the Maggy London dress company for 10 years. Eventually, she started Jeannene Booher Ltd., where she created her own line of dresses and two-piece outfits that were sold at Neiman Marcus, Barneys, Saks Fifth Avenue and Nordstrom.

Dr. Monica McMurry, dean of the School of Design, said it is support from alumnae such as Booher that continues to elevate the caliber of the fashion program, which is ranked among the best in the world.

“The establishment of this lecture series will be added recognition and prestige of an already impressive program,” she said.

McMurry said Booher is one of the most successful designers to come out of the Stephens fashion program. She not only created stunning clothing, but owned companies at a time when women in the fashion world rarely wielded such power.

“Jeannene Booher is a talented and ambitious woman,” McMurry said.

The first guest lecturer sponsored by the new series is an old friend of Booher’s, Marylou Luther, editor of the International Fashion Syndicate and writer of the award-winning Clothesline column, a question-and-answer fashion advice feature that is read weekly by more than five million people. Her coverage of the European collections appears in newspapers throughout the U.S.

Booher says industry leaders such as Luther can change the trajectory of a student’s career when they make a campus visit. That’s what happened to her when New York fashion icons Mary Brooks Picken and Madam Eta Hentz spoke to her fashion class at Stephens.

Picken authored 96 books on needlework, sewing and textile arts, including “A Dictionary of Costume and Fashion.” Hentz, a designer from the 1920s, ’30s and ’40s, is best known for her Grecian-themed collection of 1943.

“They both took an interest in me and gave me their numbers,” Booher said.

Later, when Booher was a student at Parsons, she reached out to Picken, who took the young designer under her wing and introduced her to influential people in New York. She once took Booher to a cocktail party at the home of Edward R. Morrow.

Hentz would later put Booher in touch with Trigère, an unconventional designer who did not sketch her designs but rather cut and draped from bolts of fabric. Many famous women, including Beverly Sills, Evelyn Lauder, Lena Horne, Angela Lansbury, Bette Davis and Wallis Simpson, wore her fashions.

Booher remembers her first visit with Trigère. The designer glanced at Booher’s sketches and tossed them aside.

“Then she asked me, ‘Where did you get that coat you are wearing?’” Booher recalled. “I said, ‘I made it.’”

Impressed with her work, Trigère hired her on the spot.

Today, Booher is retired from fashion and enjoys traveling and painting at her home in the Berkshires.