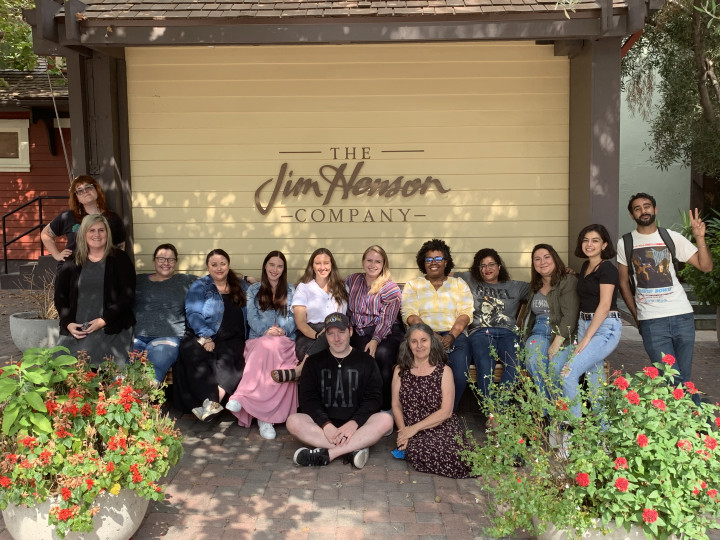 One little program with so much impact: that's the Stephens Master of Fine Arts in TV and Screenwriting. Since its founding in 2016, the program has been proving its value to graduates, who have been earning prizes, joining writing and production staffs, and landing teaching jobs around the country.

Our students and graduates have already accomplished great things ... and we're just getting started.

Chelsea Andes ’17 is the associate producer for Foundry360, a video production advertising agency at Meredith in New York City. She has worked and volunteered at numerous film festivals, including the Tribeca Film Festival, The New York Film Festival and DocNYC. Her screenplay “Daughter of Mab” made it to the semifinals of The Athena List, an annual slate of three to five screenplays with female leaders or strong female protagonists that have yet to be made into films. “Daughter of Mab” also is a quarterfinalist in the Slamdance Screenplay Competition. With fellow MFA alumnae Betsy Leighton and Misty Brawner, Andes participated in a writers’ room to break an entire 12-episode web series as part of a partnership between Unreal Media and SeriesFest.

Amy Banks ’17 is an adjunct professor in the English department at Central Methodist University and at State Fair Community College. Banks also works as a creative consultant for Sesame Studios.

Julie Berkobien ’17 is research assistant to Cari Beauchamp and the Mary Pickford Foundation. Her pilot “Blythe Park” was a selected project at Stowe Story Lab 2018 and a quarterfinalist in the 2019 BlueCat Screenplay Competition.

Mikayla Daniels ’17 made it to the semifinals of The Athena List with her screenplay “Wingman Lost.” The list is an annual slate of three to five screenplays with female leaders or strong female protagonists that have yet to be made into films. Daniels has been a regular contributor to netflixlife.com, covering series and film reviews and entertainment news. She was a judge for the “Best Screenplay” category for Happenstance Horror Festival, is screening films for Destiny City Film Festival in Tacoma, and judging films for Watersprite International Student Film Festival and Northwest Horror Festival. She also is a post-production video editor for the NBC affiliate KHQ and a writer and on-camera host for KSPS Saturday Night Cinema.

Rashaan Dozier-Escalante ’19 is on the writing staff of CBS drama "Seal Team" after having been selected for the CBS Writers Mentoring Program and the Producer Guild of America's Power of Diversity Master Workshop during her time in the Stephens MFA.

Krista Dyson ’18 teaches digital media and TV production in the Palm Beach County School District and is co-producer of the independent documentary feature "When All That’s Left is Love." The film has been accepted to 20 film festivals so far and has won several awards on the festival circuit. Most notably, it was the opening night film at the inaugural Desertscape Film Festival, won Best Overall Feature at Longleaf Film Festival, and screened at the American Psychological Association Film Festival.

Cara Epstein ’18 won an Athena Writers Lab Sloan Foundation Fellowship for her screenplay “Activated,” which also was a Sundance lab semifinalist. Epstein is a SeriesFest writers’ room writer for the web series “Dropshot Divas” and “Growing Up Old.” She recently was commissioned to write an original screenplay by a producer in L.A.

Alexandra Fernandez ’19 is a first generation Mexican-American writer born and raised in East Los Angeles. After graduating from Stephens College MFA program in 2019, she landed a job as a writer's PA on the Shondaland firefighter network drama, Station 19. As she was moving up the Station 19 assistant ranks, Alex was writing animated shorts on the side for DreamWorks Spirit & Friends with her former Stephens mentor, Ligiah Villalobos. During Station 19's season 5, Alex started her second year as a Research assistant for the show, but this time, slated to write and produce a full freelance episode herself. Alex wrote episode 5x13 "Cold Blue Steel and Sweet Fire," which was directed by Paris Barclay. Alex has since been staffed as a writer on Station 19 season 6.

researcher on the ABC show "Station 19." Her pilot "Happyland" won the DTLA Film Festival Screenwriting Competition and was a quarterfinalist in both the BlueCat and Slamdance Screenplay Competitions.

Khanisha Foster ’17 signed with Brad Rosenfeld and Nicholas Bogner and has written for two major video games, one for the company Probably Monsters and the second in the game Episodes. She also received the Fox Resident Actors Fellowship.

Kenneth Grimble ’18 co-directed and acted in "Desert Trilogy," a trilogy of short films by Pamela Winfrey and Terry Selucky, and is acting in John Lewis’s upcoming film. He also wrote, directed, and produced a short film.

Sydney Haven ’17 reached the second round of the Austin Film Festival Screenplay Competition with her comedy “Drawing Dead.”

Sahar Jahani ’18 worked as creative coordinator for YouTube Originals while a student in Stephens’ MFA program. After graduating, she served as writers’ assistant, script coordinator and writer for episode 105 of Hulu’s "Ramy," and staff writer for "Undressed" on MTV Mini Room. She currently is a staff writer for "13 Reasons Why" and a screenwriter for the book adaptation of "Ayesha At Last" with Columbia Pictures. Her original pilot, “Uncovered,” was named a Sundance Episodic Lab Finalist in 2018 and was the first MACRO Episodic Lab winner. The series is being developed with Eva Longoria’s company. In addition, Jahani was selected for the 2018 Warner Brothers TV Workshop.

Laura Kirk ’17 was promoted to assistant teaching professor at the University of Kansas, where she serves as faculty advisor for the KU screenwriting club. Her reviews have been published in the Journal of Screenwriting and she was awarded the Missouri Stories Fellowship for her screenplay "Seekers," written in the Stephens College M.F.A. program.

Betsy Leighton ’18 is board chair of SeriesFest and runs mini writers’ rooms through her production company, Unreal Media.

John Lewis ’18 shot the pilot episode of his web series Lost in Moldova after graduation. It was selected by three web fests, including the IndieFest Film Awards, Stareable Fest in New York and the Berlin Webfest.

Ghizlane Morlot ‘22  received an MFA in Television and Screenwriting from Stephens College. She was granted a fellowship by the Alliance of Women Directors in Los Angeles and participated in a six-month directing workshop with USC School of Cinematics Arts Associate Professor Jennifer Warren, as part of a diversity initiative supporting women in film. In fall 2019, Ghizlane shadowed producer/director Randy Zisk (pre-production and production) on the set of Almost Family (Fox Television). During the 2021 pandemic, Ghizlane directed Snow on The Farm, a comedy webseries featuring women, chickens (mostly female) and goats (YouTube/IGTV). In the fall 2021, Morlot joined Gallico Productions as a producer working on several projects in development. She is attached to direct her debut feature Meet Me in the Kitchen at Midnight, a dark comedy about yet another woman on the edge, written by fellow Stephens MFA alum Mary Robbins.

W.A.W. Parker ’19 cowrote “The Wasteland,” a novel about T.S. Eliot coming into his own as a writer while figuring out if he can come out to himself, which was published by Level 4 Press. His debut novel, "The Divine Proportions of Luca Pacioli," was published by The Mentoris Project. His screenplay "Leo" was a Nicholl and Final Draft quarterfinalist, and his screenplay "The Baby" was a semifinalist at the Austin Film Festival. He also wrote the "Bringing Baby Dragon" episode of the animated series "Clash-A-Rama!”

Jackie Perez ’17 is a semifinalist in the 2019 ScreenCraft Public Domain screenplay contest for “Amazing Grace,” a STEM-centric screenplay based on the life of Grace Hopper. She works remotely as a part-time grant writer for Stowe Story Labs.

Amelia Phillips ’17 wrote a screenplay for an independent producer about the true story of an Armenian Genocide survivor who risks his life to hide Jews while Nazis live on his land. “The Seventh Brother” was named a quarterfinalist for the 2019 Nicholl Fellowship. Phillips also is working freelance on a murder mystery podcast. She attended the Athena lab was accepted into the Stowe lab with a scholarship. Phillips also wrote and directed her first short film.

Sarah Phillips ’17 wrote, directed and produced "Supplements," which was named a top 20 film for the Louisiana Film Prize. The film was created by Phileon Productions, a woman-led production company Phillips created in Los Angeles. Laetitia Alix Leon co-produced and starred in the film. Phillips also won the Nashville Screenplay Competition with her screenplay for the short film “Smile.”

Megan Poepsel ’18 is working on a web series through SeriesFest and Unreal Media.

Terry Selucky ’18 co-produced, wrote and directed a short film trilogy, "Desert Trilogy," with Pamela Winfrey, and currently is producing an independent pilot that is supported in part by Sundance Podcast writing and paid by Cutler Media, LLC. Selucky also is a reader for Austin Film Festival.

Yasser Shahin ’17 is currently a lecturer at San Jose State University. Before that he worked as a lecturer at Eastern Washington University, where he taught writing courses such as writing for the short, writing for T.V., feature writing, and adaptation. Shahin mentors many young writers who live in different countries in the Middle East. Shahin spoke at festivals and events virtually and in person such as Citizen Jane Film Festival 2018. He is a coauthor of "When Women Wrote Hollywood" edited by Dr. Rosanne Welch. Shahin writes in both English and Arabic and worked with Aljazeera Network and many different international channels for documentaries and T.V. programs as an assistant producer before teaching.

Lauren Smith ’17 is a development assistant at a TV and talent management company at the Pacific Design Center in West Hollywood. The company represents Ann Curry, who is the host of the medical mystery show "Chasing the Cure," and Daymond John, one of the sharks on "Shark Tank." Smith also has written articles for BlueCan Screenplay Competition. Her screen play “Sunny’s Funnys” made it to the Scriptapalooza quarterfinals.

Dan Sturman ’17 is teaching screenwriting at Colorado College and has been working on several documentary film projects since graduation.

Chase Thompson ’17 is an associate professor of digital filmmaking at Stephens College. He wrote and directed “Tampsen Air,” an episodic film project that was nominated for Best TV Pilot by the New York City Independent Film Festival. The pilot, which was produced with the help of undergraduate students in Stephens’ digital filmmaking program, also screened at Denver Pop Culture Con, Kansas City Film Festival International and Toronto Lift-Off.

Pamela Winfrey ’18 co-produced "Desert Trilogy" with Terry Selucky, and is producing a web series called Singularity in Love. Her screenplay “No Coffee?” was selected for the Portland Comedy Film Festival in spring 2019. Winfrey also was a runner-up in Roadmap’s Wise Words screenwriting contest for her pilot “It’s a Boy!” and a finalist for “Women Will Have Their Dogs.”

Sarah Whorton ’17 was selected to participate in Jaquira Díaz's weeklong Advanced Nonfiction Workshop at Lit Fest 2021. She published two chapters in "When Women Wrote Hollywood: Essays on Female Screenwriters in the Early Film Industry" and several reviews in The Journal of Screenwriting. Her screenplay "Sight" placed in the Dramatic Feature category of the Austin Film Festival, the WeScreenplay Diverse Voices Screenplay contest, and among the Top 20 of The Film Empire FEMPIRE screenwriting contest. Whorton has presented at a variety of regional and national conferences and won the GOLD at the 2018 UPCEA Marketing and Enrollment Awards for her news release video “Master of public health with an emphasis in veterinary public health.”

Kelley Zinge ’17 wrote 11 episodes of “Kids’ Planet,” an educational TV show by CIC Media, and had her children’s story “Lullaby for Ella Vi” produced and recorded as an audiobook with words and music in collaboration with UCLA Extension. It will be available to children in residence at Ronald McDonald Houses all over the country. Zinge is working with a New York literary agent on a few children’s books and putting the finishing touches on her musical “Carnival Noir.”