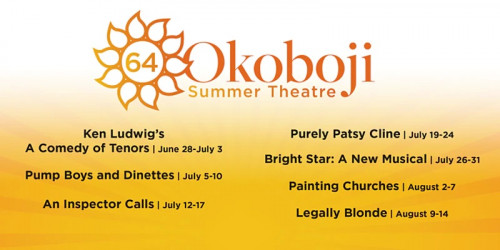 Owned and operated by Stephens College, Okoboji Summer Theatre (OST) is the only program of its kind.

One hotel suite, four tenors, two wives, three girlfriends, and a soccer stadium filled with screaming fans. What could possibly go wrong? It's 1930s Paris, and the stage is set for the concert of the century – as long as producer Henry Saunders can keep Italian superstar Tito Merelli and his wife, Maria, from causing runaway chaos. Prepare for big laughs, mistaken identities, and music!

Suspense rules in this J. B. Priestley's classic mystery when the believable middle-class Yorkshire family meets the enigmatic Inspector Goole. As one reviewer notes, An Inspector Calls "has all the elements of an engrossing whodunit." OST patrons have always been big fans of mystery, and this one won't disappoint.

Join us for an intimate look into a beloved country-western star's life, loves, and career. Patsy's come back to earth to tell you her stories, sing her songs, play with her band and even tell a few jokes for just one more night. You'll laugh, you'll cry, you'll undoubtedly sing along as you enjoy a night of Purely Patsy Cline, written by and featuring OST's original Patsy, Kelley Zinge.

An uplifting theatrical journey that holds you tightly in its grasp, Bright Star is inspired by a true story and features the Tony®-nominated score by Steve Martin and Edie Brickell. It tells a sweeping tale of love and redemption set against the rich backdrop of the American South in the 1920s and '40s. And as one reviewer notes, the story has "a rollercoaster of emotions and a happy ending that proves there will always be a "bright star" of light to shine through the darkness.

This award-winning portrait of an artist and her aging parents has been called "Beautifully written ... A theatrical family portrait that has the shimmer and depth of Renoir portraits." A finalist for a Pulitzer Prize, Painting Churches straddles the line between situation comedy and soaring prose.  A memorable story of complicated family dynamics will stay with you long after the curtain comes down.

Book by Heather Hach, Music and Lyrics by Laurence O'Keefe and Nell Benjamin

You've seen the movie, now see this musical adaptation. Harvard's beloved blonde takes the stage by pink storm in this fun, upbeat story of self-discovery. A fabulously fun award-winning musical based on the adored movie, Legally Blonde, The Musical follows the transformation of Elle Woods as she tackles stereotypes and scandal in pursuit of her dreams.  Action-packed and exploding with memorable songs and dynamic dances - this musical is so much fun, it should be illegal!

There are two sides to every story, and when the Big, Bad Wolf takes the stand in Piggsylvania's Trial of the Century, he finally gets his say. But whether he'll get a fair trial in a corrupt piggy court is anyone's guess. Will the pigs' splashy puppet show make a puppet out of justice, or is the wolf's catchy song and dance about a sneeze gone wrong all razzle-dazzle? Enter the jury box and decide the fate of Big 'n' Bad in this musical adaptation of the hit children's book.

Music and Lyrics by Drew Fornarola Book by Jeremy Dobrish. Based on the book by Molly Shannon, Orchestrations by David Abbinanti.

Molly Shannon, known for unforgettable characters on Saturday Night Live, introduces young audiences to her hilarious creation, TILLY THE TRICKSTER. Tilly is a mischievous girl who loves nothing more than causing a little trouble. From leaking cups to toothpaste-flavored cookies, Tilly has a trick for everyone: her mom, dad, brother, classmates, and even her teacher. But when the tables are turned, and her family does some scheming of its own, will Tilly decide to change her trickster ways?

Students work side-by-side with nationally recognized guest artists, faculty, alumnae mentors and working professionals. Students also learn what it takes to run a company, how all of the components of theatre must come together cohesively, and how to market not only the company’s productions, but one’s own professional self.

For donors and supporters

Each year ticket sales support annual projects, such as installation of new sound equipment; sidewalk improvements; roof, road and infrastructure repairs; and continued maintenance of our beautiful gardens and grounds.